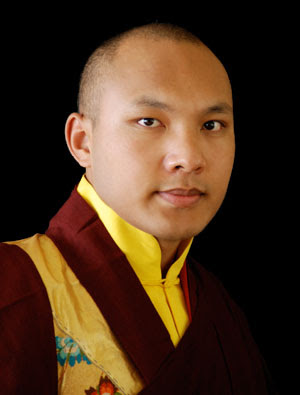 I woke up following some auspicious dreams which I won't go into detail about here.

This morning didn't go as planned. Lama Wangdu wasn't doing audiences, but I saw him later as he was leading the Gyalwa Karmapa birthday parade around the stupa. I was coming out of a door as the front of it was passing. He looked straight at me and smiled/winked. I feel I may be seeing more of him in the near future.

I also didn't go to Lekshey Ling as I bumped into some monks from there who told me Choje Lama Phuntsok is away until next week. This conversation was almost entirely in Tibetan.

Before lunch I went to a teaching by Choekyi Nyima Rinpoche. He taught on Atishas eight point of mind training, which is always a nice teaching to hear, and ever better, put into practice. Afterwards I went to get a blessing and say goodbye for now as he is leaving on a teaching tour. Just like Lama Yeshe Losal Rinpoche, he pulled my beard which makes me think it could be the start of a trend.

As I am not really a meditator I decided that today being an auspicious day, full moon, Gyalwa Karmapas birthday and a few other things, I thought making offerings and such would be a good idea. Most of the time I am like many western so-called Buddhists who never really makes offerings to support the Sangha or anything, but today through the blessing of my Lamas I remembered to do some good or at least attempt to do so.

I also put up some Guru Rinpoche prayer flags on behalf of a friend. I put them on the North East side of the stupa as there is a huge Karmapa picture there at the moment. I later noticed a rainbow on that side of the stupa over the picture as well which made me happy.


Gyalwa Karmapa, manifestation of the Buddhas of the three times and ten directions,
May you remain until samsara is completely emptied and until such time, may your activities continue and expand.
May the pinnacle of the Buddhas teaching, Bodhicitta, be born in the minds of all beings and may they in this instant realise their mind as Buddha. Until such a time may whatever suffering they are experiencing, and that which they have generated the future causes of ripen entirely in me.
Posted by Karma Phuntsok at 5:13 AM No comments:

Loads of people were sick the first week, but not me. Then my 'dad' and I both got ill two nights ago and had strange dreams, as did a few other people.

I had always assumed Kathmandu and Boudha would have less of the samaya issues than somewhere like D'sala, but I think the opposite is true. With the intensity of the course added to the mix it' hard to say what is what.

On a more personal note, I think hanging out with other students and tourist in general isn't helpful so am thinking of regressing back to old school hermit behaviour.

The weather is being crazy too, lots of monsoon clouds, but no rain.

Going to see Choje Lama Phuntsok and Lama Wangdu on saturday. The former as he is a friend of my teachers and we have a nice connection. The latter as he lives one minutes walk from my house, is generally awesome and friends with my 'grandad'. In a weird twist of syncronsity, my old friend Sonam is also living in his monastery and teaching from 'words of my perfect teacher' and the 'Bodhicaryavatara'.
Posted by Karma Phuntsok at 6:50 PM No comments:

Samsaric mind is a fucker, things change so quickly. Whilst still not entirely happy with everything here, I feel more confident just from walking round and having pretty minor conversations with people in Tibetan. One thing is for sure, if I do stay here/get a place on the course, there will be a ton of people to practice Tibetan with. I've been here less than four days and am starting to make friends, despite being as misanthropic as ever.

In other news I went to Sechen monastery today. Mind blown.
Posted by Karma Phuntsok at 3:02 AM No comments:

Arrived in Nepal yesterday. I'm staying right next to the famous Boudhanath stupa. Woke up this morning at 5.30 from a nightmare where I was being cut to pieces with razor. I've also found out I have to take a Tibetan verbal test which decides if I get to start the course or not. I'm not exactly feeling confident about it so fuck knows what I'll do if I fail. Still there is purfication and I get to do prostrations by the stupa.
Posted by Karma Phuntsok at 1:51 AM 1 comment:

Tomorrow I leave McLeod and head for Kathmandu via Delhi. It's more emotional than last time as I have had such a short time to reconnect with old friends as well as spending time with some new very special friends.

There are many monks these days who barely keep vows and don't practice, but when you meet the ones who are the real deal it's very inspiring. May the Sangha remain undivided and have support.

So to summarize the last week. I'm sort of in love with someone from two years ago and I know it will all be over within a week. I'm ok with this.

On a more meaningful level I met a monk today who it turns out used to study with a Tulku friend of mine. We immediately had the same connection which was nice.
Posted by Karma Phuntsok at 6:27 AM No comments: