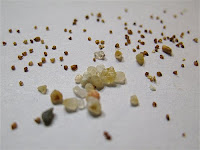 There is a plethora of opinion about the current state of Buddhism globally, ranging from wildly optimistic "Buddhism is growing like never before" to less optimistic views of the Dharma having been in sharp decline for a long time and Kali Yuga being imminent.

I don't hold either of those views, although I also don't see them as diametrically opposed either. Yes Buddhism is spreading and Dharma is becoming available to lots of people, but at the same time it has been damaged quite severely by unhealthy political and economic trends. Capitalism and Communism have both damaged Asian Buddhism immensely. In Cambodia nearly all monks and nuns were executed by Pol Pot and the Tibetan situation is ongoing. Capitalism, combined with Western cultural imperialism has also severely damaged Asian Buddhism.

There are lots of theories about why there would be a general decline in the Dharma. I say Dharma as opposed to the instituion(s) of Buddhism as this is something more worrying. As long as there is an ordained Sangha and continuation/transmission of the teachings, the Dharma will remain. However the dillution of it may erode it from within.

The way rituals are performed, the way the ordained Sangha dress and behave, how shrines are set up and all manner of other things will change. Change is a key concept in Buddhist doctrine. However when people start to say they are practicing Dharma with no mention of cause and conditions (Karma), the things are looking bleak.

Karma doesn't stop simply because it's inconvenient. I'm not going to go into a massive rant about how intent is central to Buddhist morality or how the doctrine of karma is extremely complicated, yet is often summarised as "do good and good happens, and vice versa", my point is rather one of karma needing to be a much more central issue than it often seems to be.

The internet and the Western Buddhist world is full of people who seem only interested in practicing the 'highest' teachings. However practicing without a solid understanding, and more importantly mindfulness of ones actions seems insane.

"Although my view is higher than the sky,
My respect for the cause and effect of actions is as fine as grains of flour." Padmasambhava
Posted by Karma Phuntsok at 6:00 AM 1 comment:

Rise of the Idiots revisited

A number of years ago the genius that is Chris Morris spawned a ghastly creation known as Nathan Barley. Nathan was a "self-facilitating media node" or Hoxton twat as they were known at the time. One of the less subtle sequences in the show featured a series of "idiots" like Nathan moving along the street whilst a narrative from a feature about them was lovingly read to us.

Whilst the whole basis of Nathan Barley was to satirise the media, which I was working for at the time, the whole thing could be taken to more frightening depths. The dumbing down and trivialisation of news media into nothing more than PR, and arts of all types similarly becoming nothing more than the modern equivalent of the Roman circus, we have really come as far it is healthy to go.

The current X-factor vs Rage Against the Machine is an interresting case here. Whilst Simon, David Cameron and various others whose moral compasses are non-existant are complaining about 'bullying' by the facebook campaign for RATM, the more cerebral trolls are pointing out the fact that RATM and Joe are both lining the coffers of Sony. But that's not the point. The point is that there is a concerted grass roots movement to have something anti-athoritarian and organic as the xmas number one. RATM like most politically 'radical' musicians are not going to be leading a much overdue charge on the Whitehouse, Whitehall or Copenghagen, however they might spark a few people to think for themselves about how the world is run. And the moment that process starts, then one more person is set on the path to intellectual freedom. And as limited as that might be, it's a start.
Posted by Karma Phuntsok at 3:14 PM No comments:

I've been asked to share how my retreat went so here goes.

I kept an extremely 'light' schedule vaguely based on doing regulr sessions. I took Sojong vows and kept to one meal per day, effectively following a NyungNay non-fasting approach.

In terms of the actual practice I mostly did Ngondro (Foundation practice) of Refuge and Bodhicitta with prostrations and Dorje Sempa (Vajrasattva) as well as the Guru Rinpoche practice known as "Union of the precious ones".

It was only three days, yet it felt very good all the way through. And as with every retreat, I had the sense that I could quite happily live like this.

I mentioned Bodhicitta above. I should say that Bodhicitta is also as much part of Dorjesempa or any other practice as well. I remember my friend Tulku Jampel Wangpo of Mindroling monastery saying that when you do Dorjesempa, Bodhicitta will naturally come through. This is certainly how I feel.

So basically the micro-retreat went very well and I wish I could share the immense sense off inner peace and happiness I felt, and still feel.

Having generally failed to develop any sort of compassion, let alone Bodhicitta, getting small glimpses like this consolidates my conviction that if you have a solid grounding in Dharma with a good Lama, then you really need nothing else.
Posted by Karma Phuntsok at 12:01 AM 1 comment: